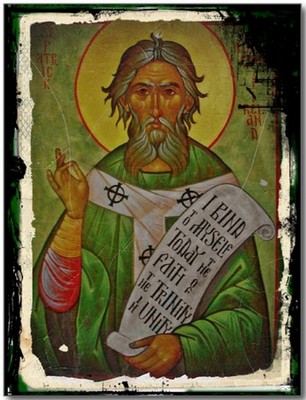 The day of Saint Patrick is celebrated every year on March 17th. It is a the date of the day when the most known of three patron saints of Ireland died. He lived in 4th and 5th century, was born sometime around 385 AD to Roman parents very likely in the area of today's Scotland (or maybe Wales).

His family was Christian, but Maewyn Succat, as he was named, didn't care about religion at all. When he was 16, family's property was attacked and robbed by Irish pirates, and Maewyn was kidnapped. He spent six years in Ireland as a slave. While he was working in isolation as a shepherd, he apparently found God. The legend says he was told in his dreams to leave, because the ship was ready for him.

He really left and walked about two hundred miles until he reached the coast, where he found a ship, which took him back to Britain. Believing his call was to become a priest, he joined Catholic Church and studied for more than a decade before he returned to Ireland, this time with new name: Patricius, meaning 'father' or 'nobleman' and on the mission to baptise as many Irishmen as possible.

His life wasn't easy. He was beaten, robbed and imprisoned several times, but still managed to convert thousands of pagans to Christianity. When he died on March 17, 461, he was soon almost forgotten, but around his legacy legends slowly started to grow. 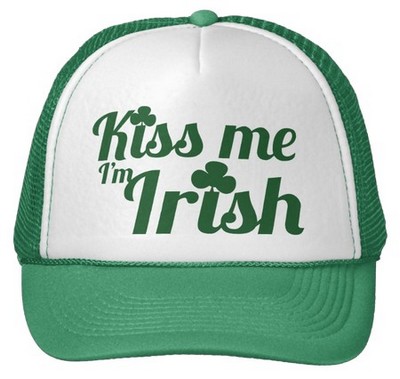 Personalized baseball caps with Irish motifs like the one above are part of worldwide celebrations.

It's interesting to note how his feast was traditionally celebrated in Ireland, where it was a family celebration with a meal, but without drinking (for many years there was even a law by which alcohol was not allowed to be served on this date, and until 1970 pubs were closed on St. Patrick's Day) and how it became popular by Americans, where many, especially on East, feel at least partly of Irish origin. Well, we are talking about approximately 30 millions of Americans with Irish roots (there is less then a four and half million people living in Ireland), so this is pretty understandable.

Green shamrock is the most known symbol of Saint Patrick, but the original color of Ireland and coat of arms was actually blue and the Order of St. Patrick also chose blue as their color (although different tone). Green color was popularized at the end of 19th century by Irish republicans, but it was on several occasions used before, because blue was too closely connected with presbyterianism and religion was always important difference between Great Britain and Ireland. 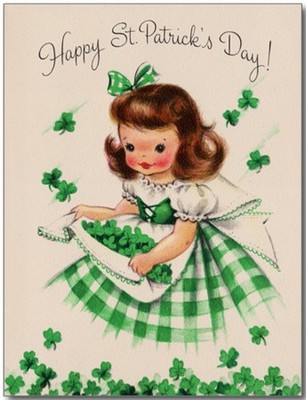 Saint Patrick, in older paintings always portrayed in blue clothes, was very likely associated with green only when he became part of fight for independence. Shamrock, as the most known symbol of Ireland (the national symbol is harp) was, according to the legend, used as an illustration of Holy Trinity: Father, Son and Holy Spirit helping to explain Christianity to Irishmen. With a shamrock, in Ireland available at every step, he tried to explain how three different things can still act as one. Custum of wearing a shamrock on national holidays can be traced to the 17th century. All these symbols can be seen in the presented retro St. Patrick postcard which can be fully personalized.

According to the legend St. Patrick rid the Ireland of snakes. There are really no snakes in Ireland today, but scientific proofs (absence of fossils) show there weren't any snakes ever. It's pretty easy to explain that. Ireland is surrounded by cold water and it would be very hard for snakes to swim to the island.

Like in every legend there is also a bit of truth. With massive baptising of Irish pagans he definitely helped to get rid of evil forces out of country, at least Christian priests, who very likely spread the word, probably thought so. And we all know a snake represents evil in Christianity. 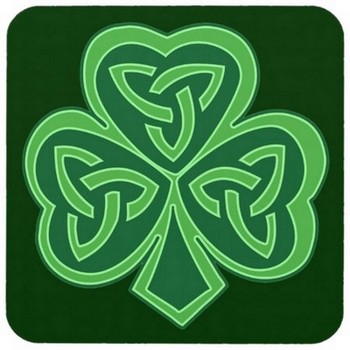 Parades are part of tradition on March 17th. They are organized in all parts of the world where Irish community is strong. First St. Patrick's parade was held in Boston on March 18, 1737, but as the beginner of the tradition is considered the parade in New York on March 17, 1762 held by Irish soldiers in British army. Don't forget - this was 14 years before the Declaration of Independence was held.

The reason for parades was not pure nostalgia. Irish people were often as unequal because they had different religion and were considered as less loyal. This treatment led to stronger and stronger organizations and parade was just one of possible expressions of their unity.

Until today every year a parade was held in New York and being about five hours with 250 thousand marchers and more than two million spectators long it is the biggest annual parade in the world. St. Patrick's Day became the major celebration of month March. The parade is held every March 17th, except when the feast falls on Sunday (in this case parade is held on Saturday).

Huge parades are organized in several cities in America, Europe and Australia, among other customs we should mention at least Chicago, where on the Chicago River is dyed green for several hours on Saturday, closest to St. Patrick's Day. When it was dyed for the first time, too much color was used and the river turned green for full week. 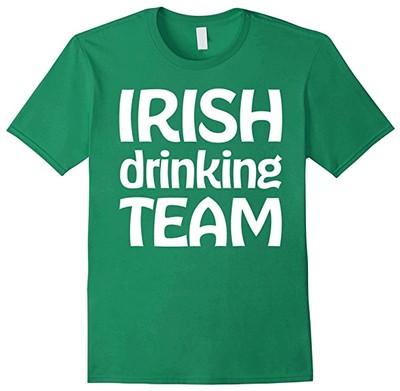 Today the Day of Saint Patrick is a huge celebration which unites very different people. It's noisy, sometimes funny and sometimes just weird show with large green hats, leprechauns (beware - tradition is clear - there are no female leprechauns) and bagpipes. With Irish stew or corned beef and cabbage, and of course with a pint of green beer (made of any, possibly lighter colored beer and food color) we all can really feel a little bit Irish for a day. St. Patrick Day t-shirts as the one on the left can only help!